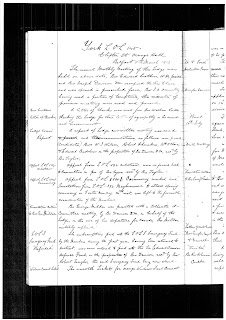 The usual monthly meeting of this lodge was held on above date, Bro Edward Leathem W.M. presided and Bro Joseph Davison D.M. occupied the Vice Chair and was opened in prescribed form, Bro J A Donnelly having read a portion of Scripture, the minutes of previous meeting were read and passed.

Bro Linton’s letter of thanks

A letter of thanks was read from Bro Wallace Linton thanking the Lodge for their letter of sympathy in his recent sad bereavement.

A report of Lodge committees meeting was read and their recommendations, as follows were passed (Candidates) Bro W J Wilson, Robert Chambers, Wm O’Hara, and Edward Bradshaw on the proposition of Bro Davison D.M., sec by Bro Taylor.

Appeal from L.O.L. 502 Ardstraw was referred back to committee on pro of Bro Sayers, sec by Bro Taylor.

Invitation from L.O.L. 392 Maghermore to attend opening ceremony on Ester Monday, inst, was left to the favourable consideration of the members.

Bro George Millar was presented with a Collarette at Committee meeting, by Bro Davison D.M. on behalf of the Lodge, on the eve of his departure for Canada, Bro Millar suitably replied.

The subscriptions paid into the GOLI Emergency Fund by the members during the past year, having been returned to District, was now ordered to paid into the Sir Edward Carson Defence Fund, on the proposition of Bro Davison, sec by Bro Robert Lougher, the said Emergency Fund being now closed.

The unsold tickets for Orange Widows Fund Concert was on the pro of Bro Sayers sec by Bro Joshua Lougher, order to be paid for out of Lodge Funds.

The Declaration Forms for the Ulster Volunteer Force were handed to the members, who enthusiastically subscribed their names to same, a further supply to be got for next meeting.

The secretary was instructed to have the usual application made to the I.O.M. S.S. Co, for a steamer on 14th July next on the proposition of Bro Wallace Linton seconded by Bro Joshua Lougher.

The secretary reported that he had concluded an agreement with the Central Unionist Club Brass and Reed Band, to accompany our Lodge on 12th July next, for the Sum of Twelve Pounds and Refreshments.

The W.M. explained that the District had arranged for Drill meetings to be held on the 2nd, 3rd and 4th Wednesdays of March, April and May, and hoped that our members would attend in large numbers.

The W.M. at the part of the meeting presented to Bro Chas Curry, a Collarette on behalf of the Lodge and wished him every success in Canada to which he was going, at an earlier part of the meeting Bro Sayers said that a few of the members wished to give Bro Curry a further token of their esteem, and asked permission to receive subscriptions from those willing to participate in this movement, the W.M. granted the permission requested of.

Letters of condolence were ordered to be sent to Bro R laugher, Bro E. J. Magill and Bro Robert Lewell in their sad bereavements.

Bro Rev Robinson from Canada, was an entertaining visitor during the evening, and received from the W.M. a very hearty welcome on behalf of the Lodge, Bro Robinson appropriately replied.

The W.M. also congratulated the Lodge on the success of their annual social, which he believed was a record for attendance, and he was delighted to know that it was such a splendid success, as everyone present had apparently enjoyed all the good things that were provided, he hoped that the members would further assist the committee by making their returns at the earliest moment.

The following candidates and new members were proposed and to remain on our books for report of committee for the usual time.

No further business being to transact the Lodge was closed in prescribed form.

Email ThisBlogThis!Share to TwitterShare to FacebookShare to Pinterest
Labels: Minutes

THE Grand Orange Lodge of Ireland has raised over £17,000 for a local children’s charity, following a major Loyal Order parade last year.

Northern Ireland Children’s Hospice was chosen by the Institution to be the main benefactor of the Ulster Covenant centenary celebrations in Belfast on September 29.

As well as collecting funds from the huge crowds which descended on the Stormont estate, many individual lodges across the Province contributed to the overall total by organising separate fundraising ventures.

The money raised will pay for Children’s Hospice community nurses who provide specialist care to children and young people in their own homes, across Northern Ireland.

Grand Master of the Grand Orange Lodge of Ireland, Edward Stevenson, said it was “humbling” for the Institution to help the many young people and their families who depend on hospice services.

He said: “It is both a privilege and an honour for the Orange Institution to support such a worthwhile cause.

“As well as commemorating a seminal event in the history of the British Isles, those in attendance at our memorable Ulster Covenant celebrations, and brethren through other fundraising initiatives, have left a lasting legacy to many families who depend on hospice care within the community.”

He added: “Children’s Hospice community nurses provide a vital and invaluable service, offering practical and emotional support for children and young people availing of hospice services. We hope this large donation will go a long way in helping Children’s Hospice to continue providing their special services.”