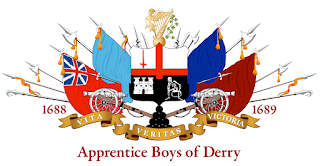 Royal York L.O.L. 145 is holding a centennial service of remembrance today to a late Member, Second Lieutenant James Alexander Donnelly, and our other fallen brethren of World War 1.

Bro Donnelly is considered to be the last man to die a member of the Royal Flying Corps on the 31 March 1918, as on 1 April it became the Royal Air Force.

A new Roll of Honour to all the Brethren who served and fell from LOL 145 will be dedicated at the service.

“It is a privilege to honour these men and remember their sacrifice to King and Country. We are also particularly pleased to be joined at the service by much of the extended Donnelly family to remember their particular sacrifice, in the loss of a Father, Brother and staunch & true Ulsterman, James Donnelly.”

“James Alexander Donnelly and his siblings John, Frank and Jane are that incredible story that comes to its own in Ulster. From what we would call today a ‘mixed’ family (their father being born a Roman Catholic), they went on to be pillars of the community in Orange, Business, Church and the Army circles. In James’ case, to excel in the new sciences of Telegraphy and Aviation. The fact we are remembering him today, is a testament to the great loss his passing was, not only to the Orange Institution, but to the Nation at large.”

The service will be held in Ballintoy Parish Church. Ballintoy was the church of the Donnelly family, and as Bro Donnelly was the most senior Lodge officer (as Lay Chaplain) to perish in the Great War, it was decided that the memorial service should be held there. His name, and those of his Brothers, the Rev John and Major Frank Donnelly, are inscribed on the Church War Memorial tablet.

The service will begin at 2PM and will be conducted by the local minister, the Rev. Patrick Barton BA BTh, with the sermon and dedication carried out by the Lodge Chaplain, Bro. the Rev. Iain Jamieson.

All are welcome to the service.

Parade to Thanksgiving Service for the life and witness of St. Patrick 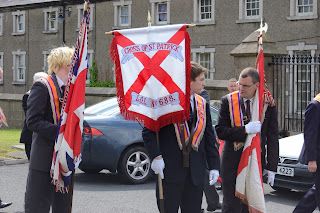 SUNDAY 18TH MARCH
Parade to Thanksgiving Service for the life and witness of St. Patrick

Email ThisBlogThis!Share to TwitterShare to FacebookShare to Pinterest
Labels: Parade
Newer Posts Older Posts Home
Subscribe to: Posts (Atom)
L.O.L. 145 is an Orange Lodge in Belfast District No 3 within the Loyal Orange Institution of Ireland.
Formed from the York Fencible Regiment before the Napoleonic Wars, it continues the proud traditions of our institution defending Civil and Religious Liberty for All.