The County Grand Orange Lodge of Belfast welcomes our Armed Services to the homecoming parade in the capital city of Northern Ireland on Sunday 2nd November. We salute all members of the Royal Navy, Army and Royal Air Force and delight in this opportunity to show our support and solidarity with them.

We encourage all to support the parade, as we show our appreciation for the heroes who have served and are still serving around the world fighting terrorism. We would ask all attending the parade to ignore those who have disdain for all things British and indeed tried to murder the colleagues of those on parade.

Please continue to pray for the families bereaved and the service personnel who were injured.
- Thursday, October 30, 2008 No comments:

Picture of the Moment V 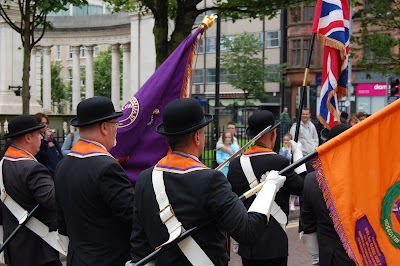 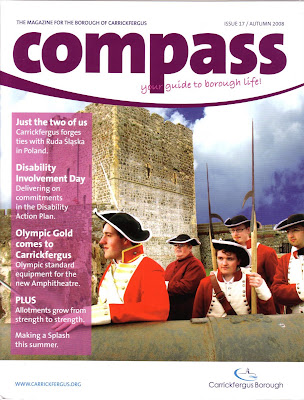 Lodge Members on the Front cover of the Carrickfergus Council magazine, Autumn 2008
- Wednesday, October 22, 2008 No comments:

To commemorate this important anniversary of the posting of Martin Luther's 95 Theses, the County Grand Loyal Orange Lodge of Belfast will organise a CHurch Parade.

All lodge members are to assemble at District Assembly Points at 1415 for parade at 1430.

There will be a service at The Assembly Hall at Church House and Assembly Buildings.

The Grand Orange Lodge of Ireland has issued the following statement:

That this Grand Lodge views with deep concern the proposed extension of the 1967 Abortion Act to Northern Ireland.

As an Institution we believe in civil and religious liberty and the entitlement of all to basic human rights. The most basic human right is the right to life itself. Article 2 of the European Convention on Human Rights begins with the phrase, “Everyone’s right to life shall be protected by law.” Abortion denies this right to vulnerable infants and so contravenes the European Convention.

The official figures alone show that around 550 babies per day are being aborted which we believe to be totally unacceptable, as the vast majority of these abortions are being carried out for reasons other than medical.

While respecting the rights of mothers the Grand Lodge of Ireland believes that a child is a separate and unique person from the moment of conception and so should have the same rights as other individuals. As a Christian organisation we believe that the Bible teaches that the unborn child is a human being with inalienable rights to full personhood. We therefore strongly urge all right thinking people to voice their opposition to the extension of this abhorrent Act to Northern Ireland.

We wish to express the support for the Members of Parliament from Northern Ireland for their stand against any change to the status quo, and call on all our members to support such a stand in their prayers.

A senior member of the Orange Order has spoken about the importance of the Institution’s halls and buildings, which he says are reflective of a vibrant Orange culture.
Drew Nelson, Grand Secretary, was speaking in Co. Down on Saturday at the re-opening of Donaghadee Orange and Protestant Hall, which was rebuilt after being destroyed by fire two years ago.

He said:
“The Orange Institution has provided community facilities such as this one since the late nineteenth century and the importance of this network of halls and related facilities throughout Northern Ireland and the border counties of the Irish Republic cannot be underestimated.
“We are all aware of the important contribution that the Institution and the wider Orange Family makes to society in Northern Ireland – much of this from facilities such as these. This work – raising substantial funds for local and national charities, sponsoring adult learning and community based education, providing venues for youth clubs, community groups, and religious meetings.
“Given the widespread nature of such activity it demonstrates why when halls are damaged, attacked, destroyed or beyond use for periods of time, the community activity of its related hinterland suffers and is curtailed. Ironically, when such tragedies occur it is a testament to the local community which rely on these facilities that the buildings are often returned to their former use as soon as possible.
“The community use of Orange Halls is reflective of how the Orange Institution and the Orange Family are at the heart of the community in Northern Ireland. Due to the terrorist campaign against our country since 1969, many, especially from small urban areas or the rural community have been unwilling to travel to large urban centres to make use of similar public property – in some cases they have felt (rightly or wrongly) that they are not welcome to use such resources.

“As a consequence the Orange Hall has continued to maintain is role as the facility best placed and most appropriate to serve the needs of the Orange Family and the wider community in Northern Ireland.
“Some of the activities include – meetings of the Loyal Orders, religious groups, youth clubs, senior citizens organisations, bands, re-enactment societies, cookery clubs, social economy projects, Ulster-Scots groups, cultural and history societies, mother and toddler meetings, educational centres and the list goes on.
“It is only right that an organisation born from the people should be at the heart of so much vibrant activity. The Institution and its facilities are part of, drivers of and reflective of the vibrant and living cultural heritage that is the Orange family in Northern Ireland and the Republic of Ireland. “

As well as the opening of the hall, a new banner for Blue Banner Total Abstinence LOL 781 was unfurled and dedicated.
The dedication ceremony was conducted by Rev. Alistair Smyth, Assistant Grand Master.