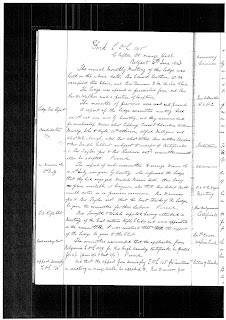 The usual monthly meeting of this Lodge was held on the above date, Bro Edward Leathem W.M. occupied the chair, and Bro Davison D.M. the vice-chair.

The Lodge was opened in prescribed form, and Bro Rev Dr Walker read a portion of scripture.

The minutes of previous were read and passed.

The report of such committee to arrange dinner on 12th July was given by secretary, who informed the lodge that they had engaged Dundela Mission Hall, there being no place available at Craigavon, also that Bro Robert Scott would cater as on previous occasions. Bro Davison pro and Bro Taylor secd that the best thanks of the Lodge be given the committee for their labours. Passed.

Bro Forsysthe and Walshe reported having attended a meeting of the East Antrim Rifle Club, and were appointed on the committee, it was resolved that the support of the Lodge be given to this Club.

The committee recommended that the application from Belgravia L.O.L. 1079 for Bro Hugh Annesley certificate be granted for 6/” (Dues 3/6 and Cert 2/6) passed.

And that the appeal from Derriaghy L.O.L. 135 for assistance in erecting an Orange Hall, be acceded to. Bro Davison pro, and Bro R Lougher secd that Lodge subscribe 10/”. Passed.

The recommendation of committee that the Lodge purchase 50 collarettes for R.A.P. Chapter 145, as per sample from Bro Wm Birdgett, @ 2/4 each was passed on the proposition of Bro Sayers secd by Bro John R Gasey. Said colarettes to be 1 3/8 yards and “York R.A.P.C. 145” be embroidered in silk on them.

The following candidates being present were initiated as members of this Loyal Orange Institution, the Rev John H Spratt and W John B Wilson.

Bro Arthur Yorall, Bro John Yorall and Bro Robert Chambers on Transfer Certificates were enrolled as members of the Lodge.

An application was recd from L.O.L. 740 for the Certificate of Bro Wm Molyneaux, Bro Dr Walker pro, and Bro C Kirkwood secd that this be left over for report of Lodge Committee. Passed.

Letters were received from Bro Rev Dr Walker, and Bro George Hawthorne, thanking the Lodge for their letters of sympathy and condolence in their recent bereavement.

Bro Thos Johnston pro and Bro Walshe secd that Bro Isiah Clements be re-instated fro 6/” after some discussion, the matter was referred to Lodge committee for Report.

The notice of motion standing in Bro Taylors name was taken up, Bro Taylor in proposing his motion asked leave to amend same by altering the word ‘affiliation’ to ‘transfer’ which was granted. The motion being seconded by Bro Joshua Tougher was discussed at considerable length and finally was withdrawn by Bro Taylor.

The Excursion committee reported that they had charter the Empress Queen for the Annual Excursion to Douglas on Monday the 14th July, and that owing to a considerable increase in charter money the price of the tickets would have to be raised to 4/6. The W.M. expressed the opion that he was sure the Lodge was satisfied with the committees actions.

This concluded the business of the Lodge which was closed in due form.

Email ThisBlogThis!Share to TwitterShare to FacebookShare to Pinterest
Labels: Minutes
Newer Posts Older Posts Home
Subscribe to: Posts (Atom)
L.O.L. 145 is an Orange Lodge in Belfast District No 3 within the Loyal Orange Institution of Ireland.
Formed from the York Fencible Regiment before the Napoleonic Wars, it continues the proud traditions of our institution defending Civil and Religious Liberty for All.