The Grand Orange Lodge of Ireland has described the Eames-Bradley Report as “deeply flawed and offensive to victims.
“More than 300 members of the Orange Order were murdered in the Troubles, many of them serving their country in the security forces, others while going about their daily lives and some while attending lodge meetings.
“The recommendation that money be paid to the families of the perpetrators of violence as well as victims’ families, is abhorrent and has contaminated the rest of the report.”

Orange lodges and individual Orangemen and Orangewomen from all over Northern Ireland have been nominated for the annual Orange Community Awards, which will be held in Coleraine on Saturday, January 31.
It is the fourth time the event has been held. Last year it was held in Bessbrook and before that in Carrickfergus and Belfast.
The Director of Services of the Grand Orange Lodge of Ireland, Dr. David Hume, said it was important to take the event around Northern Ireland.
“We are delighted that we can hold the Awards evening in Coleraine and visit County Londonderry for the first time with the awards,” he said.
“The Order holds many public and outdoor events throughout the year and this is one of the most important indoor events, when we pay tribute to the work being done by lodges, Orangemen and Orangewomen all over Northern Ireland.
“It provides an opportunity to highlight the work they do in their local community and give them due recognition for that. Often people only see the Orange Institution on parade but there is an incredible amount of work done behind the scenes.
“The Orange Order is a vital part of society and this is a great night of celebration.
“There is usually a bit of competition and rivalry to see who wins the awards and that can only be a positive thing.”
The News Letter is sponsoring the event and businesses throughout Northern Ireland have sponsored individual awards in categories including individual and lodge community involvement, charity fund-raising and the best new banner of 2008.
The sponsors are:
Victor Stewart Enterprises, Hilda Winter – Dan Winter’s Cottage, D.R. Brewster Solicitors, Joseph Long and Sons, Henry Latimer Trailers, David Mahon Properties, NC Engineering, SD Kells Ltd., Nelson-Singleton Solicitors, Calvin Agricultural Contractors, Concept Kitchens and Bedrooms, Blackwater Graphics, Coleraine Drumming Club and Coleraine Festival Committee.

The competition for the best new banner of the year always attracts major interest. This year there are five nominations: Comber True Blues LOL 1035, Co. Down, Whitewater Temperance LOL 117, Co. Armagh, Cranny Heroes LOL 1015, Co. Londonderry, Spa LOL 620, Co. Down and Blue Banner Total Abstinence LOL 781, Co. Down.
There will also be an award for the lodge which has seen the biggest increase in membership.
Two lodges will compete for the award of best fund raising lodge. They are Benagh LOL 302. Co. Down, and Banbridge Bible and Crown Defenders LOL 423, Co. Down.

In addition to the community awards, there will also be a full programme of entertainment which will include Ballarina Accordion Band, Ballywillan Flute Band, Tamlaught O’Crilly Pipe Band, Victor Gregg, Garvagh Men’s Group Choir and Bluebells Scottish Country Dancers.
- Tuesday, January 27, 2009 No comments: 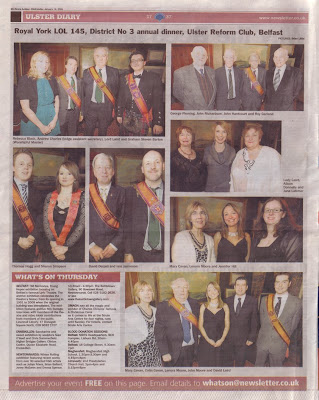