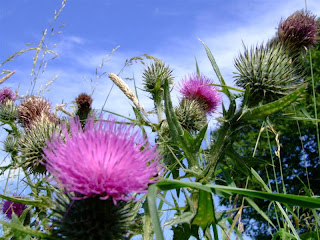 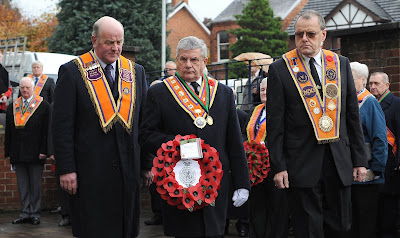 The Grand Master of the Grand Orange Lodge of Ireland, Robert Saulters, has spoken of the sacrifice made by Orangemen during the Troubles.

He was speaking at the annual Remembrance Day Memorial Service at the headquarters of the Order, Schomberg House , on the Cregagh Road in east Belfast, on Wednesday, November 11.

Today, we gather to remember those who have made the ultimate sacrifice for democracy and freedom.

We remember the men and women who died while serving their country, in conflicts all over the world. We think back to the battlefields of the First World War and the Second World War, Korea and the Falklands and many more.

More recently we have seen our armed forces fighting in Iraq and Afghanistan. Many service personnel who are based here in Northern Ireland have served with great distinction in those countries.

Today as we lay poppy crosses we should remember those brave people. And we should also let their colleagues and their families know that they have overwhelming support in the community.

Last year, I had the privilege of attending the Homecoming Parade in Belfast. It was one of the most uplifting events I have ever seen. Hopefully the soldiers on parade on that day will have seen just how much we think of them.

We must also think today of the people who lost their lives in the Troubles – those people murdered by terrorists while doing their duty or going about their daily lives. And we must never forget those who were injured.

At the beginning of the Troubles, the Orange Order encouraged people to join the security forces and serve this country. Many of our members joined the police and the Ulster Defence Regiment and served with bravery and honour.

They made a serious commitment to the well-being and safety of everyone in this community. They did their duty but paid a terrible price.

Throughout the Troubles, the Orange Institution lost 330 people who were killed by the gun and bomb. That is approximately one tenth of those who died in all those years.
It is too easy to forget the price paid by Orangemen, the length and breadth of this country.

Of those 330 Orangemen who were killed, 214 of them were serving in the security forces or had previously served. The cowards who cut them down did not really care whether or not they still wore the uniform of their country.

In fact many of the murders were carried out while our brethren were at their most vulnerable, going about their civilian lives.

We should not forget our brethren who died because they chose to serve the community. Republicans are trying desperately to re-write history – to airbrush their evil deeds from the pages of the history books that are still to be written.

They have sought to vilify the Orange Order, they have sought to explain their campaign of ethnic cleansing as some sort of justified war. That is warped logic and we will not let them away with it. They can re-write their own books but they will not be allowed to change the true history of what they did.

Protestants, unionists and the loyal orders have had enough of republicans claiming that they had the right to take lives as part of what they called the armed struggle. They had no such right and we will not let them away with it.

They do not deserve to be mentioned in the same breath as the people who put on a uniform and swore allegiance to Queen and country.

We asked our members to join the security forces and now we owe them our support. We need to stand up for them.

We will ensure that on days like this – Remembrance Day – we remember all the service personnel who have paid the ultimate sacrifice.

We all have a unique covenant with the military. It is up to all of us, and our government, to ensure that soldiers are looked after properly – while serving abroad and here at home. We must also ensure that the after care for those injured and traumatised is as good as it should be.

This country and indeed the world would be a very different place if it was not for the armed forces.

Their courage should make the rest of us feel very humble.

We will remember them.

PARADE - Sunday 8th November 2009
Palmer St. Remembrance Day Service organised by United Districts
Brethren to assemble at 1415 in Regent Street at rear of Belfast Orange Hall for 1430 parade.
The Worshipful Master requests that any Brethren not attending other Remembrance services to please attend this parade to honour those killed in the Defence of Ulster.