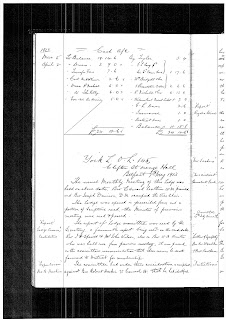 The usual monthly meeting of this Lodge was held on above date. Bro Edward Leathem W.M. presided and Bro Joseph Davison, D.M. occupied the Vice Chair.

The Lodge was opened in prescribed form and a portion of scripture read, the minutes of previous meeting were read and passed.

The report of Lodge committee was read by the secretary, a favourable report being recd on the candidates Rev J H Spratt and Mr John Wilson, also on Bro W B Hunter who was held over from previous meeting, it was passed on the committee’s recommendation that these names be sent forward to District for membership.

The committee had under their consideration a complaint against Bro Robert Haskin, 75 Carmel St that he had identified himself with the Gailic League and kindred societies, and was summoned to attend Lodge to show cause why expulsion or suspension should not be passed on him as he had informed Bro Turkington that he would not appear, neither would he sever his connection with these societies, the committee unanimously recommend he be expelled our institution. Bro R Tougher pro and Bro Storey secd “That he be expelled”. Passed.

The Regalia stewards reported having examined the Lodge sashes and found only 49 in stock, the balance could only be partly accounted for, as owing to the members exchanging sashes, it was impossible to keep a count and they also had selected a number which were soiled to be cleaned and re-done up; there were also a number in the possession of members who were suspended, others had emigrated and about 130 out of 150 were traceable. Bro R H Taylor pro and Bro Forsythe secd that report be received and that secretary order 3 doz sashes at once. Passed.

Bro R Tougher reported that No 3 District L.O.L. had revived their Benevolent Fund, and requested that each Lodge should subscribe 1/= per month to same, the committee unanimously recommended that this should be done. Bro McKinney pro as an amendment that we subscribe 2/= per month this being secd by Bro Farr, was passed (by 25 votes to 23).

The committee recommendation that the arrangement for dinner on 12th July be left in the hands of Bro Scott, R Lougher, Dorman and Sayers was Passed unanimously.

Bro Joseph Davison pro and Bro R Scott seconded that letters of sympathy and condolence be sent to Bro Rev Dr Walker, on the death of his sister, also to Bro George, Edmund and Vic Hawthorne on the death of their father. Passed.

A letter from the acting secretary of the East Antrim Rifle Club was read, notifying the opening of the season and requesting a large attendance of our members.

The W.M. having to retire the Chair was re-occupied by Bro Davison D.M.

A letter was read from Bro Joseph Graham, who was now in Toronto, wishing good Luck to the Lodge, and all his old friends and informed them he was doing well.

The W.M. Bro Davison requested that any members holding U. V. Force Forms would return them at once, as 8 were still short and also made an earnest appeal to the members for subscriptions to the “Carson Defence Fund”.

The summons sent to Bro Adderly and Turly re their suspension, was held over for another month.

The report of Annual Social committee was again held over, owing to non-payment of tickets.

The W.M. Bro Leathem having returned, now reoccupied the Chair.

Bro R H Taylor handed in Notice of Motion, - “That all members joining this Lodge on affiliation from any Lodge, uner the jurisdiction of Co Gd Lodge of Belfast, pay a Transfer fee of 5/=”.

The following Candidates and New Members were proposed and to remain on our books for the usual time, and committees report.

Email ThisBlogThis!Share to TwitterShare to FacebookShare to Pinterest
Labels: Minutes
Newer Posts Older Posts Home
Subscribe to: Posts (Atom)
L.O.L. 145 is an Orange Lodge in Belfast District No 3 within the Loyal Orange Institution of Ireland.
Formed from the York Fencible Regiment before the Napoleonic Wars, it continues the proud traditions of our institution defending Civil and Religious Liberty for All.