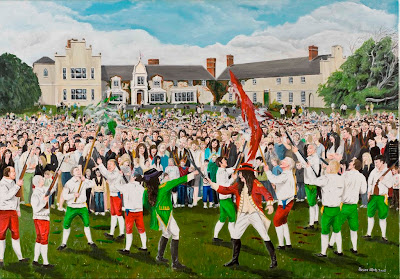 The Sham Fight – one of the biggest days in the summer calendar – has been captured on canvas.

The event is held in Scarva on July 13 every year and approximately 100,000 people pack into the tiny village to enjoy the occasion. It is probably the biggest single cultural event of the year in Northern Ireland.
Local Black Preceptory RBP 1000 organise the Sham Fight each year and there is little surprise when King William and his followers once again overpower King James.
The fight takes place in front of Scarvagh House with thousands of people cheering on the soldiers taking part.
RBP 1000 in partnership with Altnaveigh House, a community based organisation in Newry, commissioned a painting of the famous event.
Banbridge artist Bruce White has captured the day in a unique painting of the re-enactment. Set against the backdrop of Scarvagh House, the artist has brought all of the key players together.
The original painting will be held by the Imperial Grand Black Chapter and will be on display at their headquarters in Brownlow House, Lurgan.
A limited edition fine art print of the painting has been released for sale. Limited to 1000 copies (representing RBP 1000) the print will be on sale for £100 each. Each print is signed and numbered by the artist and will be accompanied by a short history of the Sham Fight.
All proceeds will go to the Sham Fight Committee and the Altnaveigh House Project.
The official unveiling of the painting will take place at Scarvagh House, Scarva, on Saturday, October 31 at 11am under the watchful eye of some of the Williamite and Jacobite soldiers depicted in the work of art.