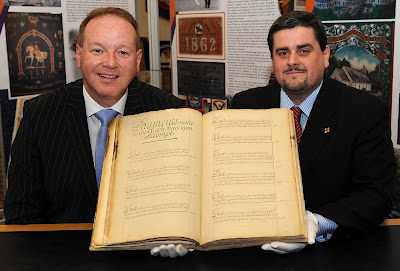 A valuable and historic book from the year of the Battle of the Boyne has been presented by Belfast City Council to the Grand Orange Lodge of Ireland.

The Paymaster General’s Book from 1690 was held by Belfast City Council for many years after having been presented to Belfast Corporation. When the council realised the importance of the book and the records it contained about King William’s Army, they approached the Orange Order.

Councillor William Humphrey, Chairman of the Council Culture, Development and Arts Committee, presented the book – on permanent loan – to the Orange Order. It will be held in their headquarters, Schomberg House, and form part of their archive.

The Paymaster General was Thomas Coningsby, an ardent supporter of King William, who was alongside him for much of the Williamite Wars.

The Orange Order Library in Schomberg House is called the Conningsby Room.

Councillor Humphrey said that Belfast City Council did not really appreciate the historical significance of the book.

“We knew that it had been presented to the old Belfast Corporation way back in the mists of time,” he said.

“But, we did not really appreciate just how much information there was in it, until we gave it a more detailed examination. You could almost say this was a narrative of the events of 1690 and the start of the Williamite Wars. It is incredibly interesting and fortunately has been maintained in pristine condition.

”We decided to give it on permanent loan to the Orange Order so that more people would have access to it and read the fascinating detail.”

Dr. Jonathan Mattison, Research Assistant at the Grand Orange Lodge of Ireland, said the book was a goldmine of information.

“We are delighted to have such an important piece of history for display in Schomberg House,” he said.

“We are currently developing plans for the creation of an Interpretative and Educational Centre so that the whole community can learn about the Orange and related tradition in Irish, British and world history. Manuscript material like this book will have pride of place.

“We are extremely grateful to Belfast City Council for placing such an item with us.”