More than 200 people attended the fourth annual Orange Community Awards, in Coleraine Townhall on Saturday night.
The Grand Master, Robert Saulters, told the audience the awards were the Orange Order’s opportunity to thank people for their efforts to create a better society.
“These awards are about recognising effort, commitment and dedication to both the Orange Institution and the communities in which we live,” he said.
“I want to congratulate everyone who was nominated for an award and the winners of all the categories.”
Among the main guests were the Culture Minister, Gregory Campbell, MP, MLA, and the Mayor of Coleraine, Councillor David Barbour.
One of the main awards of the evening was the Best New Banner for 2008. It was won by Spa LOL 620, Co. Down, for a banner depicting King William of Orange on one side and the portrait of murdered lodge member Corporal David Brian Brown, QGM, a dog handler with the Ulster Defence Regiment, who was killed in May 1986 when searching for an IRA bomb in Kilkeel. The banner was painted by William Magowan, of Garvagh. 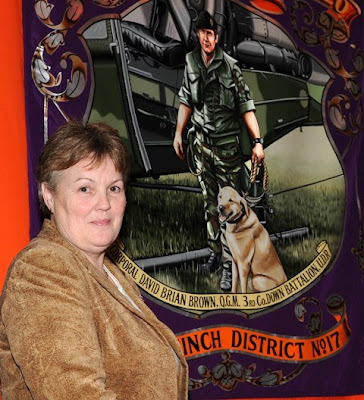 The award was presented to lodge members and to the Corporal’s widow, Mrs Florence Brown.
The award for the lodge with the biggest percentage increase in 2008 went to Eden Sons of William LOL 77, Rasharkin, while the award for the biggest increase in numbers went to Brunswick LOL 1702, Mourne District.
Banbridge Bible and Crown Defenders LOL 423 were selected as the best charity fund raising lodge. The lodge raised £1400 for Cancer Research and also raised £7,200 for the Northern Ireland Cancer Fund for Children by carrying a lambeg drum to the top of Ben Nevis in Scotland.
The Individual Community Award went to James McClean of Carnlea Crimson Banner LOL 961, Co. Antrim, for over 40 years service to his lodge and his community. He is heavily involved in the credit union movement and has been a lifelong member of High Kirk Presbyterian Church, where he has been an elder since 1997. Mr McClean has many other active roles in various other community organisations.

The Individual Merit Award went to Joanne Honeyford, a member of Coleraine WLOL 78 for over 10 years. Joanne has been secretary of the Coleraine Festival Committee for the past three years and was a key figure in the very successful Twelfth celebrations in Coleraine in 2008. Her hard work resulted in the Coleraine demonstration being selected as one of the Flagship Twelfths last year.
The Orange Standard Award went to Rev. Dr. Canon Ernest Long, a member of Star of Down LOL 478, and a founding member of the newspaper. He continues to contribute a monthly column to the Orange Standard at the age of 95. He has also written numerous other publications, including books.
The Grand Master’s Achievement Award went to Wilfred Breen, Blacksessiagh LOL 226, Omagh, for his dedicated service to the Institution and for his literary skills inconstantly putting forward the Unionist and Orange cause in the media.
Entertainment during the evening was provided by Tamlaught O’Crilly Pipe Band, Ballywillan Flute Band, Bluebells Scottish Country Dancers, Garvagh Men’s Group, Victor Gregg and Bellarena Accordion Band.