This is the speech given by the Cavan Co. Grand Master Henry Latimer who met the Republic of Ireland President, Mary McAleese, at an Orange Hall in Co. Cavan this morning.

It gives me pleasure today to welcome President McAleese to this Orange hall in County Cavan where I have the honour of being County Grand Master. Before I begin I would like to take this opportunity to thank the President and her husband Martin McAleese for the support they have given to date for the endeavours being undertaken by the Loyal Orange Institution in the Republic of Ireland.

Halls like this one we are in today are held very dear by the Orange Family. 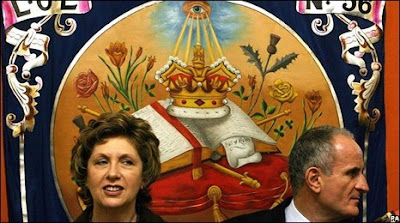 Éamon Ó Cuív, Minister for Community, Rural and Gaeltacht Affairs, recognised the important role that Orange halls provide in society when he announced funding for Cadolemo Ltd, which has been established by Orange Order Lodges in Counties Cavan, Donegal, Leitrim and Monaghan, to support an innovative community-based initiative in the border region. The funding, over a two year period, has allowed for the employment of a Development Officer who is and will be working with the various lodges and halls.

• The importance of this work in helping to build the capacity of the Orange Family in the Republic of Ireland cannot be underestimated. The Orange Institution has provided community facilities such as this one since the late nineteenth century and the importance of this network of halls and related facilities throughout Northern Ireland and the border counties of the Irish Republic cannot be underestimated.

• We are all aware of the important contribution that the Institution and the wider Orange Family makes to society – much of this from facilities such as these. This work – raising substantial funds for local and national charities, sponsoring adult learning and community based education, providing venues for youth clubs, community groups, and religious meetings.


• Given the widespread nature of such activity it demonstrates why when halls are damaged, attacked, destroyed or beyond use for periods of time, the community activity of its related hinterland suffers and is curtailed. Ironically, when such tragedies occur it is a testament to the local community which rely on these facilities that the buildings are often returned to their former use as soon as possible. This hall has been rebuilt after an arson attack and efforts are underway, thanks to the support of the government to enhance the facilities in other halls within the border counties.


• Some of the activities include – meetings of the Loyal Orders, religious groups, youth clubs, senior citizens organisations, bands, re-enactment societies, cookery clubs, social economy projects, Ulster-Scots groups, cultural and history societies, mother and toddler meetings, educational centres and the list goes on. It is only right that an organisation born from the people should be at the heart of so much vibrant activity. The Institution and its facilities are part of, drivers of and reflective of the vibrant and living cultural heritage that is the Orange family in both the Republic of Ireland and Northern Ireland.


As a responsible stakeholder in society in both the Republic of Ireland and Northern Ireland the Loyal Orange Institution wants to play its part in improving community relations. We are a people proud of our history, our Faith and our cultural heritage and want to play a part in helping people understand our tradition and why it remains relevant in the modern World.