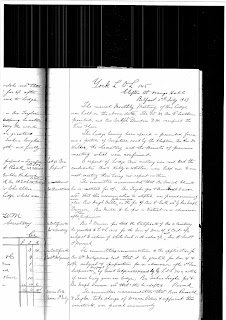 The usual monthly meeting of this Lodge was held on the above date. The W.M. Bro E Leathem presided, and Bro Joseph Davidson D.M. occupied the vice-chair.

The Lodge having been opened in prescribed form and a portion of scripture read by the chaplain, Bro Rev Dr Walker, the secretary read the minutes of previous meeting which were confirmed.

A report of Lodge Committee meeting was read and the candidates Bro Kelly and Whitten were held over to our next meeting their being no report on them.

The committee recommended that Bro Isaiah Clements be reinstated for 10/”, Bro Taylor proposed and Bro Joseph Davison seconded that this recommendation be adopted, was passed unanimously as was also Bro Hugh Mills for the same sum on the proposal of Bro R Scott, seconded by Bro Joseph Davison, Bro Mills to be proposed in District once readmission after 2nd term of suspension.

Bro  J Davison proposed that the certificate of Bro A Courtney be granted to LOL 1213 for the sum of dues and certificate 2/6 subject to return of white sash or its value 7/6, seconded by Bro R Scott and passed.

The committee recommendation to the application for Bro Wm Molyneaux Certificate that if be granted for dues of and cost 2/6, subject to proposition for readmission after 2nd term suspension being proposed by Grand Lodge and to be proposed by LOL 740, notice of same being given our lodge, Bro Joshua Lougher proposing and Bro Joseph Davison seconded that this be adopted. Passed.

The committee recommendation that Bro Russell and Taylor take charge of Deacon Poles and appoint their assistants, was passed unanimously.

Two visiting Brethren were announced and on the proposal of Bro R Lougher seconded by Bro Charles Kirkwood.
Bro Stewart, WM No 4 LOL New South Wales, and
Bro Wm J Whiteside LOL No 7 New York
Were admitted and received a very hearty welcome, the WM conveying the greetings of our Lodge to the visitors.

The WM now appealed to every member of the Lodge to attend Divine Service on Sunday 6th inst, in St Barnabas Church at 3:30 PM under the auspices of No 3 District and he further appealed that the members would by their attendance at 12th July Celebration in Craigavon be making History, and he hoped that this Demonstration would show to our Lead, Sir Edward Carson, that the Orangemen of Belfast could always be relied upon to support him in his fight for our Civil & Religious Liberty.

Bro R Lougher requested all those who had signed the Ulster Volunteer Force Form to attend a Parade on Saturday the 5th inst, and gave further particulars.

The WM having to retire the chair was reoccupied by the DM Bro Joseph Davison.

An application was read from LOL 2097 Toronto for the Certificate of Bro Jospeh Graham, proposed by Bro Taylor and seconded by Bro R Lougher, that secretary forward same free. Passed.

This having concluded the business, the Lodge was closed in due form.

Email ThisBlogThis!Share to TwitterShare to FacebookShare to Pinterest
Labels: Minutes
Newer Post Older Post Home
L.O.L. 145 is an Orange Lodge in Belfast District No 3 within the Loyal Orange Institution of Ireland.
Formed from the York Fencible Regiment before the Napoleonic Wars, it continues the proud traditions of our institution defending Civil and Religious Liberty for All.