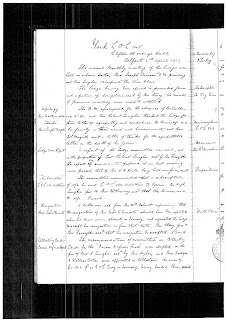 The usual monthly meeting of this Lodge was held on above date, Bro Joseph Davison D.M. presiding and Bro Taylor occupied the Vice Chair.

The lodge having been opened in prescribed form and a portion of scripture read by Bro Storey, the minutes of the previous meeting were read and adopted.

The D.M. apologised for the absence of Bro Leathem our W.M. and Bro Robert Tougher thanked the Lodge for their letter of sympathy and condolence to himself and his family on their recent sad bereavement, and Bro E S Magill sent a letter of thanks for the sympathetic letter on the death of his father.

A report of the Lodge commite was read, and on the proposition of Bro Robert Tougher, secd bt Bro Forsythe the report on candidates proposed at our last meeting was passed, that of Bro W B Hunter held over for one month.

The committe recommended that a subscription of 10/6 be sent L.O.L. 502 Ardstraw Co Tyrone, Bro Hugh Tougher pro and Bro McKenrey secd that this be increased to 20/=. Passed.

A letter was read from Bro Wm Calvert explaining that the resignation of Bro John Clements should have been reported when his dues were cleared in January and requested the Lodge to accept his resignation as from that date. Bro Storey pro and Bro Forsythe secd that his resignation be accepted. Passed.

The recommendation of committee re Collecting Cards for teh “Carson Defence Fund” was adopted on the Pro of Bro R Tougher secd bt Bro Taylor, and Bro Hodgen and Wallace Linton were appointed as Collectors. The sum of £1=17=6 pd as G.O.L Levy in January being handed thus and to be credited to the respective members having paid same.

Bro Hugh Tougher pro and Bro Taylor secd, that secretary write Bros Aderley and Turley who had been re-instated for 10/= that unless the amount be paid, the resolution re-instating would be rescinded, and 2nd term suspension would become effective. Passed.

Bro Hodger pro and Bro Sayers secd that the annual subscription of £1 =/= to Vigilance Committee be paid. Passed.

The secretaries for the annual re-union reported that owing to the non-return of tickets and cash they were unable to make a final report.

A cordial reception was given to Bro Edward Bradshaw O.C. from L.O.L. 181.

This concluded the business of the Lodge, which was then closed in prescribed form, the Deputy Master extending hearty invitation to all present to join the Drilling in the Large Hall as the business was shortened to allow all to attend.

Email ThisBlogThis!Share to TwitterShare to FacebookShare to Pinterest
Labels: Minutes
Newer Post Older Post Home
L.O.L. 145 is an Orange Lodge in Belfast District No 3 within the Loyal Orange Institution of Ireland.
Formed from the York Fencible Regiment before the Napoleonic Wars, it continues the proud traditions of our institution defending Civil and Religious Liberty for All.