The following speech was given by the Deputy Lord Mayor of Belfast, Wor. Bro. William Humphrey at the platform proceedings at the Belfast demonstration on Monday, 12th July 2010.

"I am delighted and indeed honoured to be invited to address this great gathering at Belfast on the 320th Anniversary of William’s Glorious victory at the Battle of the Boyne.

I would like to thank the County Grand Lodge of Belfast for the invitation and to congratulate them on the vision of establishing Orangefest as the catalysis to promote Belfast’s Boyne celebrations. 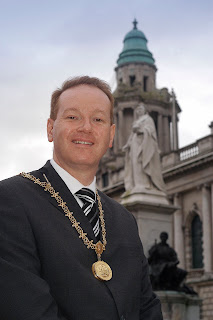 Sisters, Brethren and friends, today we commemorate and celebrate the Battle of the Boyne, the defining battle of the Glorious Revolution.
We thank God for sending for deliverance from tyranny and arbitrary power. We give thanks for William of Orange and for his great victory at the Boyne.
And for his pledge to what is now our United Kingdom
“The Protestant religion and the liberties of England, I will maintain.”
As we know from our Orange ritual and from the great writers of history, at the Battle of the Boyne William defeated the tyranny of the Roman Catholic King James.
There is no doubt, that without William’s arrival our cherished United Kingdom as currently constituted would simply not exist.

In celebrating the 320th Anniversary of the Battle of the Boyne we should never forget the tremendous privileges which flowed for this United Kingdom from the Glorious Revolution.
Privileges, which were hard, won and privileges we must never take for granted.
Orangefest is the perfect occasion to appreciate aspects of Ulster's rich heritage and culture – Diversity is strength not a threat. Diversity provides a real opportunity for a tolerant, inclusive society to be established within this city.
In recent years, the Orangefest committee, working with the County Grand Lodge of Belfast, has been developing the 12th July celebration as an increasingly family friendly event.
Last year we witnessed city centre shops opening for the first time in many years.
The results were extremely positive:-
•    Trading was equivalent to that of a Thursday night.
•    62% of those who attended had NEVER been to a Belfast 12th before.
•    98% of shoppers polled said they enjoyed their day and would be back this year.
Belfast is currently marketed as the UK’s City of Festivals. Within the Belfast’s festival calendar The Twelfth is the largest tourist attraction, not just in our capital city, but across Northern Ireland.
We know that along with indigenous population, there are many national and international visitors who travel to Northern Ireland in July, ensuring that their visit to coincides with our celebrations.
The County Grand Lodge of Belfast and Orangefest have, for the past four years, been working with central and local government departments, Belfast City Council, the visitor and Convention Bureau, Chamber of Trade, the City Centre Management and the police to further enhance the family friendly atmosphere of the Twelfth.

This has proven to be very successful.
The colour, pageantry and music of the Twelfth in Belfast is enjoyed by over 250,000 thousand people. The BBC’s live television broadcast attracts a huge audience share – not  to mention the two local channels’ highlight programmes.
The number of tourists travelling to Northern Ireland for the Twelfth has grown exponentially. The three Belfast Welcome Centres have all witnessed an increase in terms of interest in July.
These visitors have a hugely beneficial knock on effect to the local economy with their spend benefitting local bars, restaurants, transport companies, drapers and hotels around the Twelfth holidays.
Indeed, such has been the growing attraction of the Belfast Twelfth that some hotels are registering “bed night” occupancies of more than 80% over the 11th -13th July.
•    Figures recently released by the Belfast Visitor Convention Bureau reveal that in July, 1999, 22,694 hotel rooms were sold in the city.
•    Ten years later this had almost trebled to 64,900 in July. With a significantly higher number of beds available - Hotels in Belfast had an average 63% occupancy in July 2009.
•    In 2008, 53,800 rooms were sold in Belfast in July and this rose to 64,900 last year – an increase of 21%.

Much more needs to be done and greater resource given to maintain the significant progress that has been made in the development of the Twelfth as a tourist product.
Ladies and gentlemen, there can be no doubt that the Twelfth of July is a positive for Belfast and increasingly its economic benefit to the local economy is being accepted and appreciated.
Despite the broad appeal demonstrated today across Ulster with some 700k people taking part in or spectating at our various demonstrations we still have those who would deny this Institution its place in Northern Ireland society.
The right to assemble and parade as Orange brethren has been curtailed by the Parades Commission. We must recommit ourselves to ensure that the Parades Commission is no more.
What of the Parades Commission – Their processes are incoherent, their decisions inconsistent and their approach is incompetent.
However, politically we have made some progress:-
We have secured the de-rating of Orange halls.
New Criminal Damage legislation will ensure compensation for Orange halls attacked, damaged or destroyed.
The Twelfth of July once again provides us with the opportunity to showcase all that is good about our enduring Orange tradition.
However, Sister and Brethren it is parading and the orchestrated campaign of attacks on our property which continue to cause concern.
More than 300 of our halls have been seriously damaged or destroyed. Unfortunately these attacks continue, seemingly unhindered and at will.
Intolerance and sectarianism is also demonstrated on the attacks upon our traditional Orange parades.
The reality is that Nationalist and Republican politicians and commentators must take responsibility for such behaviour.
They cannot call people on to the streets to oppose the legitimacy of Orangeism or make inflammatory speeches and not accept the responsibility for the actions of those who act outside the law.
They peddle intolerance and demonise our tradition!
Sisters and Brethren, we know Sinn Fein is intolerant, we know they despise our culture and heritage, but today I have a simple message for the Sinn Fein leadership.
You Can’t Win, You Won’t Win, We Will Never Surrender!
Sisters, Brethren and friends, we know that Republicanism fears our Orange Institution. The Orange Order is the glue which holds our community together. The great common denominator in the Protestant community is their target.
The question we must ask is why? Yet the answer is simple!
The Orange Institution is the biggest impediment to their achieving their goal. Gerry Adams has said that Sinn Fein’s aim is to realise a United Ireland by 2016.
So let me re-iterate what that great Presbyterian unionist Thomas Sinclair said at the Unionist Convention in 1892
“We are Children of the Glorious Revolution and we never accept a Dublin Parliament.”
Well from this platform – 118 years later let me spell it out for Gerry – it just won’t happen!


What Nationalists and Republicans opposed to our great tradition are increasingly realising is that as an Institution we are now more competent and confident than we have been for generations.
We are now playing our role in civic society and engaging with local, regional and yes National governments across these islands.
The Orange Institution is not demoralised and as the talk’s process recently demonstrated our voice is no longer ignored.
It is time for the Sinn Fein leadership to practice what they preach. They talk of Building an Ireland of Equals and yet practice intolerance and cultural sectarianism toward this Institution.
As Adams showed when his masked slipped in his Athboy speech all those years ago and Maginnes showed last year with a speech in Bodenstown, SF isn’t interested in accommodation it’s about domination. They simply wouldn’t have an Orangeman about the place.
Where is the Equality, where is the Parity of Esteem, where is the commitment to a shared and better future!
The reality is that Nationalist and Republican politicians and commentators must take responsibility for this.
I have a clear message for our Orange family across this United Kingdom. We have turned the corner, we have weathered the storm. We must set a course and show determination and resolve to ensure our tradition endures.
I am confident about my unionism, I am confident about my Orangeism.
Sisters, Brethren and friends. Our Cause is a just cause.
William of Orange and the Glorious Revolution left us with a Great and Honourable legacy.
As Protestants, within our fraternity, we are a proud and progressive people.  Here we stand we can do no other.
Fellow Unionists – Be Confident, Be Determined, Be Assured
Our tradition will prevail and our heritage will endure but our message remains the same – No Surrender!