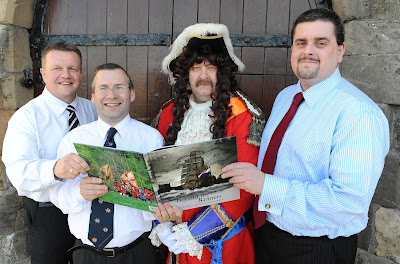 The three authors of the world history of the Orange Order - Beyond The Banners - pictured with King William (Robert Jordan) at the launch of the book in Carrickfergus. They are from left David Scott, David Hume and Jonathan Mattison.


A new book has been published, telling the story of the Orange Order across the world.
Beyond The Banners has been published in a joint venture by the Grand Orange Lodge of Ireland and Booklink, an international publisher based in Holywood, Co. Down.

The 144 page hardback is a full colour, high quality production, which features photographs and images of many artefacts held by the Orange Order.

Beyond The Banners focuses on the Institution worldwide, including countries where lodges no longer exist, such as Malta, Cuba, Brazil, India, Nigeria, the Philippine Islands and South Africa.

The publication places the Orange Order in the context of Irish history and world society. It was launched at a reception on Thursday, June 11, in Carrickfergus, the town where William, Prince of Orange landed before the Battle of the Boyne.

The authors of the book are Jonathan Mattison, David Scott and David Hume. It was financed by the Educational Affairs Committee of the Grand Lodge.

The cover of the publication is an impressive specially commissioned piece of artwork, produced by graphic artist Kyle Thompson. It is an iconic image of William arriving in choppy seas in Belfast Lough with Carrickfergus in the background.

The coffee table book includes chapters on The Glorious Revolution, early Orange Societies, the foundation of the Loyal Orange Institution, fraternal bonds across the world and famous Orangemen. There are also sections on Orange Halls, banners and regalia.

The book will be on sale at Schomberg House, the headquarters of the Orange Order and also in bookshops at £20.

The Grand Master of the Orange Order, Robert Saulters said:

“I am thrilled with the book. It is a fantastic history of the Orange Institution and can be enjoyed by everyone who reads it, regardless of whether they are in the Order or not.
“Currently the Institution has nine grand lodges across the world – Ireland, England, Scotland, Canada, the United States, New Zealand, Australia, Togo and Ghana. We have 100,000 members and we are a vibrant organisation, centred on the Reformed Protestant Faith, which makes a huge contribution to society in so many different ways.
“There can be few cultural organisations as big as the Orange Order with membership in different parts of the world.
“I am currently the President of the Imperial Orange Council of the World. The Council meets every three years in the various jurisdictions throughout the world and highlights the brotherhood that exists across the world in common cause.
“I am delighted that delegates from all over the world will hold their annual conference in Northern Ireland in July.
“Northern Ireland will be at the centre stage of Orangeism this summer and the launch of this book was timed to coincide with the arrival of so many of our friends from around the world.
“I would like to thank everyone who was involved in its production. Our designers, publisher and all the contributors have worked exceptionally hard and I believe the end product speaks for itself. The quality of their work shines out from every page.”

The publisher of the book, Claude Costecalde of Booklink in Holywood said:

“I have worked on a number of other big publications such as Presbyterians in Ireland and Stormont, the House on the Hill and they have been very successful. I believe that the image of the Orange Order has been unfairly dented over the years and I trust that this book will redress the situation.
“As a Frenchman, I have been fascinated by the Orange Order and it has been a privilege to work with so many committed people.
“This book will be unique. Beyond The Banners is a wonderful gift, a reference book and a comprehensive guide to the history of an organisation that has been an important part of society for more than 200 years.”
- Saturday, June 13, 2009