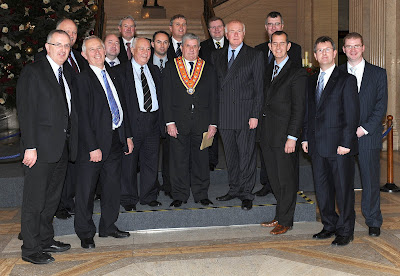 MLAs, who are members of the Orange Order, today handed in a letter of protest to the office of the Social Development Minister Margaret Ritchie in protest about remarks she made recently about the Institution.
The MLAs were accompanied by the Grand Master of the Grand Orange Lodge of Ireland, Robert Saulters.
He said:
“There are 37 members of the loyal orders in the Assembly, just over one third of the entire number. That is a very significant percentage and we wanted to point out to Ms.Ritchie that these Orangemen are making a positive contribution to the political process in Northern Ireland and she should take note of that fact. Our members are very busy and we were delighted that so many could take time out of their diaries to sign the letter in the Great Hall at Stormont today. Others, who could not attend, contacted me to voice their support.
The letter handed in to the office of Ms Ritchie said:
“We are writing as members of the Northern Ireland Assembly, including members of the Executive, who are also members of the loyal Orange Institution.
“On Monday, November 17, 2008, the Irish News reported that, speaking at a GAA Conference in Belfast you said ‘while the loyal orders have some progressive people around who wish to move them forward to a better place, they remain unlike the GAA sectional and sectarian and deeply divisive in our community’
“As members of the Loyal Orange Institution and colleagues in the Northern Ireland Assembly we take great exception to these remarks.
“We think it was quite inappropriate of you to make such a statement just one day after an Orange Hall was blown up outside Pomeroy in Co. Tyrone.
“These remarks are themselves unfair, divisive and potentially inflammatory and as such there would be a considerable body of opinion that you may also be in breach of your Ministerial Code of Conduct.“As you have not denied the report publicly, we call on you to withdraw those remarks as a matter of urgency.”
- Tuesday, December 02, 2008