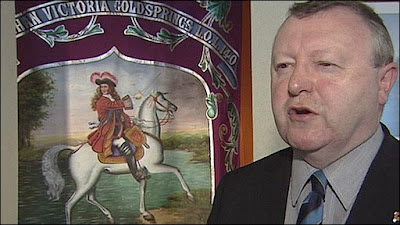 Speaking at Belfast on 12th July 2008, Drew Nelson, Grand Secretary of the Grand Orange Lodge of Ireland, described Unionist disunity as the Achilles’ Heel of Unionism.

"We all understand how difficult it can seem to achieve Unionist unity.

Politics naturally attracts very committed people with genuinely strongly held views - people with definite opinions and who are prepared to expend a great deal of personal effort working towards the change that is required to achieve their political goals.

We understand, and it is democratically healthy, that many people in the Unionist Family will have had differences of opinion on a number of issues and that they will have crossed political swords many times over the years.

However, everyone in the Unionist Family is committed to maintaining the Union between Great Britain and Northern Ireland – and the advantages which that Union clearly brings.

Unionist disunity is not a new problem.

Since Stormont collapsed in 1972 the Unionist people of Northern Ireland have been encouraged to vote for at least thirty political parties, including:

And Unionist disunity is not a recent problem.

In the late 1800’s Political Unionism was divided into two major camps – Conservative and Liberal. People realised that these divisions within the Unionist community did not have to be.

They agreed to set aside personal differences, personality clashes and differences of opinion on side issues and, in 1904 these diverse strands of Unionism, including the Loyal Orders, coalesced in a determined and defined movement to defend the Union and the ideals which it represented. The importance of the formation of one unified, single party and movement cannot be underestimated.

- Our educational system is under attack.
- New Irish language schools are being opened with a smaller enrolment than state schools, which are being closed.
- Our emblems and symbols are subject to constant attempts at suppression by officialdom.
- The President of the Irish Republic – who continually and offensively describes herself as the President of Ireland – seems to see herself as having equal status with the Queen in Northern Ireland.
- I could put another twenty points on this list but suffice to say that all of these matters are alienating many in the Protestant community, who feel that all things British are under attack in Northern Ireland whilst all things Irish are promoted.

All of the Unionist Politicians agree that a secure Union with Great Britain is in the best interests of the people of Northern Ireland, but they disagree on the tactics of how to ensure that the Union is strengthened and maintained.

Many ordinary Unionists feel that the divisions in Political Unionism are driven more by personality clashes, minor differences of opinion and contrived rows rather than genuine philosophical or ideological differences.

The Orange Institution wishes to encourage reconciliation and co-operation within the Unionist Family and we offer our support to those who are genuinely working to that end.

Disunity and division within the Unionist Family is lowering morale amongst our people and there is a danger that some may even be discouraged from voting in future elections.

This is a very difficult issue, which must be addressed to enable the Unionist Family to maximise our influence."
- Saturday, July 12, 2008